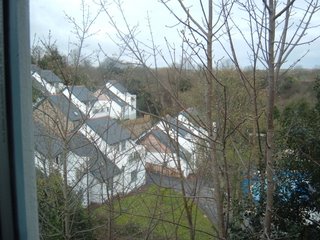 We recently spent the pre-Easter week in the highest grade accommodation that we have ever experienced in the British Isles. There are plenty of stories in the press about 'boutique hotels', which are the new breed of place to stay. When it comes to self-catering however, contemporary is not the preferred style in the holiday letting industry, whereas twee usually sells. But diligent searching on Google by my wife brought us a quality of holiday that we could only have dreamt of a few years ago.

The Valley at Carnon Downs near Truro is a secluded development of cutting-edge designed houses around a small central complex of swimming pools and restaurant/bar. In fact it looks like a small hamlet, but from the pages of an architectural magazine rather than one that you might come across in the wild. The place we stayed in had an open plan ground floor with luxury kitchen, ample dining space and comfortable seating area with v-shaped bay with french doors. In summer you could throw these open to commune with nature and down the complimentary mead as you watch the sunset.

Upstairs, were two designer styled bedrooms with luxury ensuites. The master double had full length windows leading to a small triangular balcony: the smaller twin-bedded room was large enough for the children's needs. The whole effect was a million miles from the usual hastily converted outbuildings or whatever that usually passes for holiday cottages. These were all purpose built for the twenty-first century's needs - consumers want a lot more from their holiday these days. The development was small enough to maintain a village-like feel and the whole effect was like modern-day Portmeirion. I resisted the temptation to shout "I am not a number..." you will be glad to know.

The fact that the place had facilities appealed to us, and of course we had to try the restaurant, more of which later. You will not be surprised to learn that the outdoor pool was off-limits but looked like it would be a popular attraction in the summer. We ventured into the indoor one and found it to be large enough to get some decent swimming in, but would probably get a bit short on space if four families used it at the same time. There was a small gym, which we didn't try, and a games room with bar-billiards and pool. We spent an enjoyable half an hour trying to remember the rules for bar billiards, which used to be all the rage in pubs in the late seventies and early eighties, but which got phased out in favour of Space Invaders and the like.

So what about that restaurant? Again it was a contemporary space with large windows overlooking the pool, whitewashed beach-hut like ceiling and up-market tables decked in white linen. We think they had missed a trick by only being open in the evening, but maybe this changes in the height of summer. The welcome was warm from the recently hired staff who were obviously still getting to grips with the basics of service, but meant well.

The target market for this operation is clearly the reasonably affluent, as the menu was quite top-end with prices to match, but the food when it came lived up to expectations in the taste department, if not quite justifying the price. A typical dish was the slow-cooked rack of lamb, which was melt in the mouth. Our second visit to the on-site eatery was on the Wednesday, which was "posh fish and chips night". This being Cornwall, the county surrounded by the sea, you would expect decent fish, and we were not disappointed. To cap it all, the price was much more reasonable. OK, so we did have fish-cakes, but these were full of different varieties of fish and seafood, which reflected the plentiful supply.

We don't usually go back to places, as we work on the premise that there is lot of world out there and only a limited time to explore it, but we just might return one summer.
Posted by Rod K With NASA at 9:13 pm No comments:

It's not easy trying to dodge the showers on an April Sunday walk, but we managed it. The Kennet & Avon canal is the picturesque heart of Newbury and we really should do more to enhance it, but a swift stroll along its banks makes you realise that it is already one of the town's greatest assets.

We started at Victoria park, and threaded our way through the town in the direction of West Mills, which has the power to transport you back in time, as the cottages that stand by the banks of the canal are from an age when the industrial use of the waterway was at its height. On the way, we passed the backs of the restaurants and pubs which fill one side of Newbury's cafe quarter, the Market Place. The council has great plans for this, effectively turning it into a continental piazza, free from traffic and able to be enjoyed by residents and vistors alike.

After this, we passed the bridge that has become the symbol of Newbury, a narrow stone arch that separates the northern shopping area of Northbrook Street, with its high street names, from the independent traders of Bartholomew Street in the south. The path disappears through a small tunnel next to the Lock, Stock and Barrel pub and here the wall is grooved from the tow-ropes of the barges which plied the canal. The vista opens up after the dark of the tunnel, and the gem that is Newbury lock appears before you, with its wooden gates only just able to hold the pressure of the upstream water. One of the forthcoming 'Town Trail' sculptures is sited here, a granite bowl that fills and empties along with the lock: it is not that exciting to look at, but you have to admire the physics.

The southern view here is dominated by St Nicolas church, a stone ediface paid for by one of the town's benefactors, Jack O'Newbury, who made his fortune in the cloth trade, which was the major industry of the town in Tudor times. There is a real sense of peace and tranquility here, even when there is activity around the lock in the height of summer. The main action on this day was a canoe race, with soggy punters carrying their craft around the obstructions and leaping back into them before paddling off to the finish line, which we had passed back near the start of our walk.
The tow-path leads up to the swing-bridge, which the canoeists aren't able to get under, and we saw a couple of narrow-boat pilots operate the mechanics to open up their passage along the canal, to the advantage of one pair of race participants, who came along whilst the bridge was swung. This bridge gives access to some canal-side houses and cottages, one of which, the Newbury Granary, is a strange four storey high, but narrow-boat-thin tower. It is divided into separate apartments, and looks like it should blow over in the slightest wind, as it doesn't look thick enough to withstand the force.
Aside from the traditional buildings there is a wonderful extension (that is larger than the building it ajoins) fashioned in wood and glass, and with a silvered roof. It looks like a Swedish sauna, but it makes a welcome distraction from too much twee canal-side architecture. Again, a very broad-minded planning officer must have okayed it, as it is definitely not in keeping with the surrounding area, but challenges it and stands on its own.
We turned around at this point, and headed back past the church, through the lanes, and over the emblematic bridge. Our journey back in time was at an end.
Posted by Rod K With NASA at 8:56 pm No comments:

Email ThisBlogThis!Share to TwitterShare to FacebookShare to Pinterest
Labels: walk

Those restaurant reviews in full...

Recently reviewed on this site:

Look out for more reviews in the near future. Ideas for West Berks centred (usually) restaurants to report on are gratefully received. Those highest on the list at the moment are: