A walk on the battlefield side

The first battle of Newbury: Wash Common, 1643 to be precise. That's not when we did the walk by the way - it was last weekend. There's nothing quite like looking at a piece of history to bring it up to the minute and alive again, so that's what we did.

We set off from Essex Street, which is named after the Earl who commanded the Parliamentarian forces. I am indebted here to David Nash Ford's Royal Berkshire History site, linked in the title. It must be said that this walk is best undertaken in a flaming day in July, rather than a slightly damp one in January, as the scenery would really come alive then.

We tracked down the eastern edge of the battlefield with the backs of houses to our right, and the open field to our left. It wasn't much of a stretch to imagine what it must have been like back in 1643 as the Royalists blocked the Parliamentarians route back to London and forced them to fight. There was a eerie stillness which hung heavy with all those souls that perished here.

We continued down from the vantage point enjoyed by the forces loyal to the Crown and swung west, where we could look back up the hill and wonder how much of an advantage they ultimately squandered. Occupying the physical if not the moral high ground is one way to win, but Essex's forces managed to overcome this.

Passing Skinner's Green Farm and heading back uphill, where the original path is stunted by the controversial bypass, which ruins the calmness and tranquility of the scene, we came up past Round Hill, where Essex had held firm and withstood waves of attack from King Charles. It was difficult to see how this tiny point of a hill jutting out from the main site could have afforded the Parliamentarian forces much protection, but it was enough, with some tactical skill, to ensure that the Royalist forces were depleted enough to cause them to slink away overnight, and leave the way clear again.

We trekked back towards the road named after the victorious leader and home again. It was only an hour, but transported us centuries.
Posted by Rod K With NASA at 8:31 pm No comments:

Do NASA do beds? Apparently they do, as astronauts have to catch zeds like the rest of us earth-bound mortals. When we went looking for a new bed at the weekend, little did we know that Space technology had found its way into the bedroom. Actually I told a small lie here, it isn't a space bed - now that would be cool, but a high viscosity (memory foam) mattress.

That's right, instead of a stitched fabric containing springs, there is an enormous slab of foam, which deforms to support your body perfectly, and returns to shape when you get out, or move. It feels weird when you try it, as you normally expect a bed to bounce slightly as you get in. Not this one, it just gives and you create your own sleepy hollow.

I liked it so much I bought one, and have made up a poem in its honour.

We are getting a new bed from NASA,
At least that's the plan.
We aren't fans of the ubiquitous divan.
We hope it's more effective
Than a single Temazepam.

Catch The Hare while you can

I don't know if The Hare at Lambourn Woodlands' chef, Tristan Mason, makes crop circles in his spare time. Come to think of it, head chefs at busy rural eateries don't actually get much spare time. But, on the plate, his leitmotif is the circle, and all manner of irregularly shaped foods end up mimicking the shape of the plate on which they are served.

That's as may be, I hear you ask, but what does it actually taste like? Well considering, as my mother, who we had taken out for her birthday bash let me know, that belly pork is a cheap cut of meat, Tristan turns it into a piece of heaven. That is the essence of fine dining: taking the ordinary and turning it into the extra-ordinary. 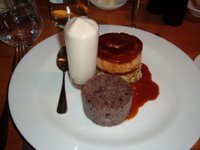 This belly pork is turning into a signature dish, with the beautifully succulent meat resting on a bed of cabbage all in a perfect disc, with another cirumference of black pudding mash alongside. The circular theme is extended with a glass of apple foam - not a heavy sauce, but the most delicate apple flavour suspended in a sea of bubbles.

My father, mother, eldest and wife opted for this celebrated meal, with my youngest trying the salmon, which she devoured. She is never normally a big eater, but caught up in the moment she polished it off like the rest of us. I opted for the roast beef as I had sampled the pork dish on our last visit, celebrating my mother-in law's 70th birthday. The beef was as rare as a sunny day in January and all the more tasty for it.

But hang on a moment: the circular theme was there from the off - in the shape of my foie gras and red onion marmalade roulade. That is a taste combination to die for. The rest of the family opted for poached eggs on brioche with sauce hollandaise and these were as light as a hot air balloon, but not, alas, the same shape.

For puddings, we were split 50-50. Half opted for the chocolate fondant with chocolate and pistachio ice creams, the fondant being baked with a fine crust concealing the gooey centre and the rest of us went for the winter fruit crumble, which was delicate and flowing with flavour.

With house wine, the bill for six was around £160 and the birthday girl was as knocked out as the rest of us with the experience we had.

Considering the strength of muscle in the kitchen, and the warmness of the welcome in the dining room, this place is un-realistically cheap. It is but a few miles down the road from the Vineyard, a michelin starred establishment, which attracts the sort of bucks that the award confers, but the Hare can give it a run (no pun intented) for its money.

Competition for diners pounds in West Berks is very stiff. We have an oasis of quality restaurants to chose from here, especially compared with Bracknell Forest, which was a culinary desert when we lived there in the early nineties. Mind you, given the amount of money about in this horse-racing corner of the county, we won't be piling on the pounds just yet. Prices are not at bargain basement levels, but the Hare is an opportunity to eat above its station.

Try it before they put the prices up to match the quality of their offering - in a word, fantastic.
Posted by Rod K With NASA at 8:45 pm No comments:

What is the difference between a object in the real world and one inside a computer? There are many we could choose but the real world one lacks a handle, a unique reference to that object.

Why is this important? If you are trying to describe your identity (of you, the physical being in the world) uniquely to the many websites with which you have a relationship, there is no way to do this currently. Each website, such as Amazon, delicious etc. has to have a username for you and yet another password. This situation is only going to get worse as we progress to an online world. These days I try to log in to sites that I haven't visited in ages, and there are always helpful links saying 'forgotten password' but very rarely 'forgotten username', which is the real problem. How much more convenient if your identity at all these places were the same.

Microsoft have tried to solve the problem with their Passport system, but this is widely discredited now and is being played down as a technology by the boys from Redmond. What is really needed is a handle: a unique reference to you the person - a sort of digital analogue.

And while we are in the business of giving people a handle, why don't we do it for everything? Using Web 2.0 techniques, we could get people to register all of the types of object they own or come into contact with, be it Playstations, Ipods, concrete mixers or bottles of salad dressing.

We already have a unique referencing system on the Web: the URI or Uniform Resource Identifier. If we classified each object with its own URI then we would be nearer the Holy Grail of uniquely identifying things. So we could have something like:

to uniquely identify the PC on which I am writing this, in the imaginary Classification of Things (COT) domain.

To get back to identifying people, how could the above scheme be extended to instances of Homo sapiens. Unfortunately we don't have unique serial numbers and may have to wait a few million years for evolution to provide us with one. I don't really want to wait that long.

This is where Public Key encryption comes in - if we want to uniquely identify ourselves, we could claim a Public Key from a identification provider. The provider would guarantee that this was unique within their domain. This key is part of a a two key pair, the other part of which is the Private Key and which would need to be securely transmitted to you - probably not by the internet!

If the website now wants to check that we are who we say we are, they can send a challenge (in the form of a number) encrypted with our public key. We are the only people who can decrypt this, because only we know the private key that forms the pair. We do so, and get back the original challenge. To prove that we got it, we encrypt with the website's public key and send it back. This cannot be intercepted, as the website is the only one with the private key for the pair.

If the website gets back the original challenge, then the communication must have been with the person who owns the public key.

We can go further though - we can encrypt all of our personal information such as Credit Card details and shipping addreess, at our classification URI and make this available to the website only by using their Public key - only they will be able to access this information. We will have to trust that they only make proper use of it, but this is similar to providing details to Amazon today. They remember all of your details between visits so that you can buy stuff with a single click.

Building this type of self identification into browsers must surely be that route to the secure Web 2.0. Death to the username!
Posted by Rod K With NASA at 8:55 pm No comments: