If you go to the seaside in Britain in Spring, you just don't know what you are going to experience. Predictably though it was lashing with rain, but the sight which greeted us in St. Ives was like nothing I had ever seen before. The sand had a beautiful luminescence which gave off a warming glow beneath the lowering clouds, and caused us to forget the appalling weather. In front of this apparition, right on the edge of the beach itself stood the object of our mission, the Porthminster Cafe. 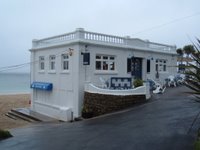 We hadn't booked, as the rain had upset our plans and to console ourselves we had headed for some great food. We had read a review in the Guardian, the week before our trip, so we knew where we might find it. We were not that early either, but the friendly staff went out of their way to find us a table, with a shortish wait under the awning, next to the patio heater, with that great view of the beach.

The delay had made us even more ravenous, as we eyed the cheerful diners in the dry of the stylish restaurant itself, but the lateness of the hour meant that this would be a strictly two course affair: we had to see Tate St. Ives after all. Two of us opted for Crab Linguine for mains, with the youngest trying the goat's cheese tart, and for myself, the Sea Bream. This was Cornwall, and we were near the Atlantic, so dishes prepared with the sea's bounty were definitely on our menu, and luckily were on theirs.

The fish was served whole and was a revelation, with the skin producing a depth of flavour I had only previously experienced with, say, a grilled sardine. The flesh was perfectly cooked beneath and was a foil to the more piquant covering, which I had nearly discarded. Reports of the crab linguine were excellent, with the super-fresh shredded meat suspended within the arms of the willowy pasta. The youngest member of the party managed to polish off the goat's cheese tart, as we had to delay lunch almost to the point of starvation. The things we do to bring you these reports! Apparently, the tart had crusty flaky pastry surrounding the oozing cheese, and was 'really lovely'.

For pudding my eldest and I both chose the Tamarillo, which when it arrived turned out to be a poached reddish fruit like a pear, but tasting of boiled sweets. This came with home made vanilla ice-cream, which brought the sweetness down to more manageable levels. The others chose the cold chocolate souffle, which was light, glazed on top and beautifully chocolatey.

And so our journey to the culinary south west was at end and we made our way along the path at the back of the beach, beneath the main railway line into St. Ives, and headed to the cultural destination of the gallery. Yes, it was still raining, but we had sampled the best cooking we found on our short break, and that more than made up for it. Go there.
Posted by Rod K With NASA at 9:25 pm