As a full moon r 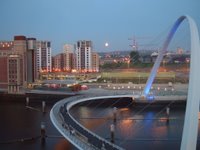 ises over the Millennium Bridge, it is lit up from beneath by a purple glow, to enhance its gently curving form; taut wires suspending the smooth inclined walkway linking Gateshead to Newcastle. My eye is drawn, looking out from my Malmaison Hotel room, down the river to the imposing arch of the Tyne Bridge, its perfectly horizontal roadway carried above ship height by its graceful arch and stocky end columns. The way the span dominates the buildings it flys over it reminds me more of Brooklyn than North East England, but the whole vista lends this part of Britain a real sense of identity.

Further into the distance, at a less vertigo inducing altitude, the Swing Bridge pivots on its own little concrete island, which bisects the channel neatly forming two passages for the river traffic. Unfortunately, one of the most iconic structures, the double decked, dual car and train High Level Bridge is out of commission for motor vehicles and pedestrians alike, until May 2008, shrouded in plastic sheeting, hiding renovation work from the eyes of the world.

We had arrived in this city over the equally tall rail bridge, pulling into the Central Station on Friday evening, after the marathon journey from Reading. A walk around the metropolis this morning reveals that the land rises steeply on both the Gateshead and Newcastle sides, so that the centres sit on their respective hills, but with the iron arms of the bridges linked in friendship, or at least mutual respect, across the water. The city seems drawn to the river as a result, but years of decline in the traditional industries have left this artery devoid of life. As it establishes itself as a tourist centre, more traffic will use this oasis, but at present it is like a motorway with no cars.

In a dominant position in Gateshead, sits the Owen Luder Partnership's 'Get Carter' car park in all of its Sixies brutalist glory. I hadn't realised just how prominently it is visible on the skyline until I saw it for myself. But just as Portsmouth with its OLP Tricorn Centre, now demolished, is re-inventing itself, so too is Gateshead transforming itself into the cultural capital of the region.

After tasty tapas at La Tasca, a restaurant near our hotel, we headed over the Millennium Bridge to the Baltic Centre, a former flour mill that had had its brick clad form punched through with six huge stories containing the best contemporary art that the region could muster. On the ground and in the level two galleries were masters of 'pixel' painting, Ian Stephenson and James Hugonin: the former layering tiny dots on tiny dots on an enormous scale, creating a sea of colour which seemed three dimensional. The lighter colours appeared to float above the surface of the painting. James Hugonin uses pixels of a different kind, working within a silver-point etched gessoe grid of alternating narrow and wide bands. The resulting rectangles are filled with colour according to a carefully ordered progression, which aims to mimic the light and form found in nature around his Northumbrian studio. He has been painting this way for twenty years, producing work of subtlety and gently flowing movement: organic matter growing from a geometric core.

The upper two floors have startlingly different work. On floor three is the photo and video art of Sam Taylor-Wood. Her shots of her own suspended form from which all trace of support has been magically erased, produce a sort of extreme sensual ballet, captured at an instant by her lens. Sam's video work captures surreal images: a sleeping David Beckham, a cellist playing a digitally doctored cello, stop motion still lives decaying before your eyes.

In don't think I have ever been handed a health and safety warning for a work of art before, but that is exactly what happened prior to entering Wang Du's Space-Time Tunnel. You have to mount steps rising up from the gallery floor to meet the entrance to this crazy installation, with its snaking tube filled with a babel of TVs, overloading your senses and causing your legs to lose their normal capacity to convey you upright, without losing your balance. The sting is in the tail of this work: having climbed first down then up within it, you must get back to ground level and what better way than to slide on your butt, so that you arrive giggling and screaming like a child on the gallery floor. 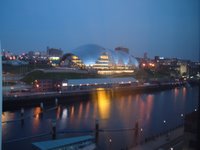 In the evening we headed to Norman Foster's transparent maggot-like Sage Concert Hall, also on the cultural South Bank in Gateshead, to hear the Northern Sinfonia and Chorus, and their rendition of Zadok the Priest. The venue's acoustics are truly astonishing. The solo unamplified voice of the Radio Three presenter could be heard plainly at the back of the hall where we were sitting. The power of the combined voices and orchestra brougt the emotion of the piece alive - echoing the Coronation of King George II for which it was written.

The next piece was less well known, by Finzi: 'Dies Natalis', but had shadows of Vaughan-Williams, who was a friend and obviously a strong influence. The second half was given over to Britten's 'St Nicholas' and this wide ranging and dynamically modern work demanded not only a large orchestra with timpani, but also piano duo, tenor solo voice plus lone boy soprano supported later in the piece by three contemporaries. Even one chorus was not sufficient, as they were augmented by female voices from the cathedral choir. The whole effect was mesmerising and brought the day to a fantastic finale.

This land of hard-edged structures had a soft soul of music and art - you would be mad to miss it.
Posted by Rod K With NASA at 9:02 pm

Email ThisBlogThis!Share to TwitterShare to FacebookShare to Pinterest
Labels: newcastle