Being proud of your area is a good thing, and the folks who live in Northern Mono County, home to Topaz, Coleville and Walker have a lot to be proud of. We had the privilege of travelling down US395, through the Walker valley en route from Lake Tahoe to Yosemite and happened upon a tiny microcosm of American life, high in the Sierra Nevada. 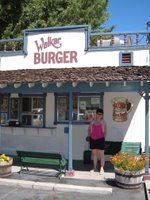 It was August this year, and the California sun was shining, as it had done constantly after we had left mostly fog-bound San Francisco. We had just crossed back from Nevada by the beautiful Topaz lake, and felt like stopping. We looked out for a likely place, but we had moved from the mostly urban travelling of our first days in the States, to more sparsely populated regions. Still, it seems that even the tiniest places, and Walker was certainly that, have their own set of facilities. No, it wasn't exactly a strip: a straight highway packed with neon and garish signs, but it did support a motel and its very own burger joint, the eponymous Walker Burger.

It looked like a small chalet, a simple building with an awning to shield the happy customers from the sun, and a couple of grilles located above a narrow counter. At the first grille, which dutifully slid open when you approached, you ordered your food and beverages, and the second was where it all appeared a few minutes later. To announce its arrival, the staff simply piped up "Order number 42" or whatever your receipt said over the PA system. It was a devilishly simple system, and ensured that there was no messing about taking names or getting orders muddled if they contained similar items.

When you got your refreshments there was a shady garden with tables off to the side in which to enjoy them away from the glare of the sun. We didn't eat there, simply slaking our thirst with Cokes and Iced Tea, but it was doing very good business from the passing trade, and with all the care that they put into the place, I am sure that the food would have been delicious.
Looking at the website for the area, it is the epicentre of some spectacular country and wildlife. Although we didn't stay, opposite was even the West Walker Motel, which would have formed a good base to explore the lakes, Topaz and Mono, the mountains and the river itself. As I said, even the smallest community puts its heart and soul into making you feel welcome and selling you the attractions of the place.

Perhaps it is time to start promoting West Berks as a destination. It is too easy to think that there isn't anything to attract visitors, but sometimes all it takes is some long hard looks at your natural resources and a bit of imagination. We were glad that the residents of Walker love their environment, and were prepared to share it. All for a few dollars, of course.
Posted by Rod K With NASA at 9:35 pm