The citizens of West Berks were subjected to their own personal Armageddon today as torrential rain fell with a vengeance from before we rose at 7am through to 2pm. The weather forecast had been terrifyingly accurate, with no let up in the precipitation for the whole morning.

My lunchtime journey home prompted by a worried call from my family was a shocking adventure as I turned from the A4, itself covered with several inches of water into Fir Tree Lane. The sight that greeted me was like nothing I have ever seen before. I have used the expression 'the road was like a river' many times, but on this occasion it was never truer. The sight of a torrent of muddy brown water streaming between the kerbs, gushing from risen manhole covers, towards me will stay with me for ever. 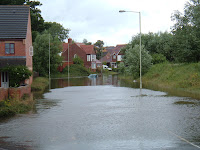 Worse was to come though, as I drove through Manor Park I saw water coursing down Yates Copse and making a sweeping turn into Waller Drive, where it entered an impromptu lake which stretched as far as I could see past Passey's yard. I turned around and luckily found a passable route home. A reconnaissance mission later on when the rain had ceased revealed the true extent of the flood, which had claimed a car, the occupants of which had to be rescued by the residents of Fleetwood Close, by swimming to retrieve them.

Apparently the water level had been several feet higher and had subsided back to that pictured here, even though it had only just stopped raining. The cause of this was immediately obvious when we walked through the dried out area later on. A wall around the scrapyard was damming the water when it gave way under the pressure and allowed some respite on the drowned road.

Several houses in the area had been under water, at least one up to its letter-box, and so the clean up must now begin after what should have been a day of joy for the children of West Berks: the last day of term before the summer break. A day we will not forget in a hurry.
Posted by Rod K With NASA at 9:23 pm