I have to admit that at first I was sceptical. Travelling down to Kent from Newbury seemed a long way to go for a team building exercise, with all of the carbon emissions that it entailed. This also seemed like pure indulgence, after all we weren't helping the community but helping ourselves. But as the day drew nearer I became resigned to the fact that we were off to Whitstable for a day of fun. It's a tough job, but someone has to do it.

We arrived early, which ensured that we had time to look around the town, which was like stepping back in time to an age when your high street wasn't dominated by look-alike chain-stores, but had real independent shops. The only recognisable retailer was Woolworth's and even this store had managed to retain its shop front logo from circa 1970. Still, there was quite a buzz about the place - no urban backwater this, but a seaside town without a tacky prom.

As far as I could tell, there were two major attractions to Whitstable: the sea and oysters. The sea I knew of course, but I was much less familiar with oysters. Luckily for me, we got the opportunity to experience both. 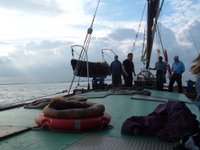 Highlight one was a trip aboard the Thames sailing barge, Greta. This hundred year old vessel appeared to be home to a couple of keen seafaring types, and we had the pleasure of being taken out from Whitstable harbour for a couple of hour trip taking in views of the isle of Sheppey, and admiring from afar the large wind farm that has sprung up off the coast. The weather was pretty good for a quick cruise round the bay, the morning's rain having abated, but the winds were light and so no speed records were broken. All who wanted got a chance to try their hand at the tiller, and you quickly got used to the fact that steering produced motion long after you had moved your hand. This made for many corrections, but generally got us there in the end. 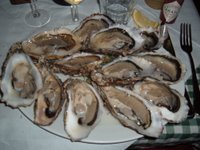 The second highlight was a visit to Birdies Bistro, and the chance to try those famous oysters. I can reveal that slurping them down in one is a skill, but one well worth acquiring, since eating them is like gagging on something that ought to be going the other way. The overall effect is that you are eating something that is good for you and despite a bit of sandy grit, and a slightly salty aftertaste, you are earning the respect of your peers for tackling something a bit tricky.

The main course was a much safer, but no less delicious Sea Bass, and for pudding their version of Eton Mess: Whitstable Mess. I didn't wash this down with quite as much alcohol as others, as I had my critical faculties to keep about me, but this was still an enjoyable stay in undiscovered corner of England. 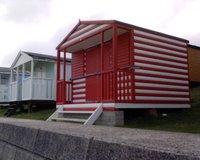 In the morning I realised that there was one more treasure that this place had up its sleeve. Other places have beach huts but Whitstable goes for them in a big way, with several tiers of them, one behind the other for maximum density. They are a tradition that has died out in many a seaside town, but this place celebrated them as if all the tired and spare ones had gravitated here over a few years.

For a back to the Fifties experience, it cannot be beaten. Try it, you know you want to.
Posted by Rod K With NASA at 9:06 am